The 6th OMNeT++ Community Summit in September 2019 at the Hamburg University of Technology was special in more than one way. First, it hosted only the second Hackathon in the history of annual OMNeT++ summits, with slightly more projects participating than before. Second, it broke with the traditional conference format of presenting to a large audience for the first time, and went for ConverStations instead, a more interactive format which encourages direct feedback and more discussions. Third, it featured a Community Development session for the first time ever. We report about the third one (community development) in a separate post, but read on to learn more about the Hackathons and ConverStations, and our experiences with them!

Oh, before we go on: the Summit’s keynote speech also deserves special mention. It was not only very enjoyable about an exciting and at the same time very approachable topic, but also reported on using real-life experiments and simulation to complement each other, and the ensuing difficulties of getting the results published in the face of reviewers with different mindsets. Kudos to the organizers!

Back to our primary topics.

First, Hackathon. More and more teams are starting to realize that participating in the Summit and especially in the Hackathon is a great way to screen your ideas or half-cooked implementations with the core team and/or with other members of the community. You can get early feedback, receive practical advice on setting up the project, you can discuss how the components you implement can best integrate with INET, or receive useful tips on improving runtime performance or on result processing – any of which can give a boost to your project and spare weeks of work. It is often possible to find cooperation partners among those working on similar projects or wrestling with the same problems as you. (There were examples of all of the above in this Hackathon.) Therefore, plan to attend next year! ;)

ConverStations. This innovative conference format has been gaining popularity in recent years. Still, it is hard to find material on the format – this is the only decent description I found, from an earlier ICT4S conference. The idea is that instead of standing up in front of a large audience, the presenter sits together with 5-6 other people around a table, and explains the topic to them. For that they may use pre-printed notes, a laptop, pen-and-paper illustrations drawn on the spot, or anything else. The listeners are encouraged to interrupt with questions or delve into discussions during the presentation. The format allows the presenter be more relaxed and to receive more direct feedback, and the listeners to gain a deeper understanding of the work. There are several tables, and therefore several conversations going on at any given time. When a session is over, people switch tables, and often roles as well (a presenter in one session can be a listener in another). During the conference, presenters have more than one opportunity to present (usually 2-3), each time to a different audience, and therefore their presentations can also improve throughout the conference. The technical problem of reserving seats for the desired presentations is elegantly solved by the participants having to collect “tickets” (in the Summit, colored post-it notes were used) early in the conference. 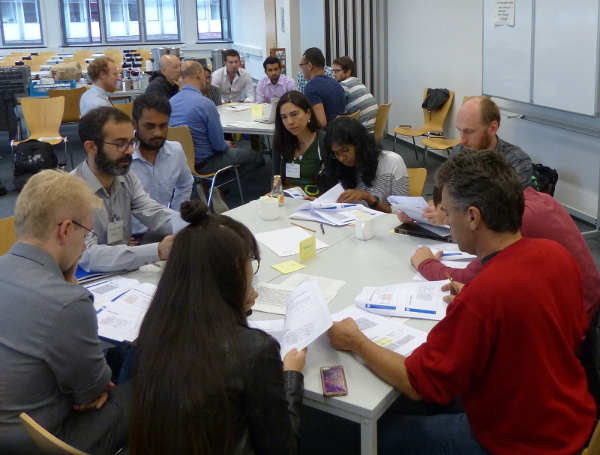 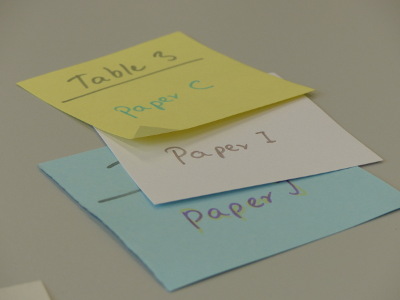 According to feedback gathered informally during the event and online afterwards, ConverStations was universally liked by the participants of the Summit, which makes it likely that it will be chosen next year as well.