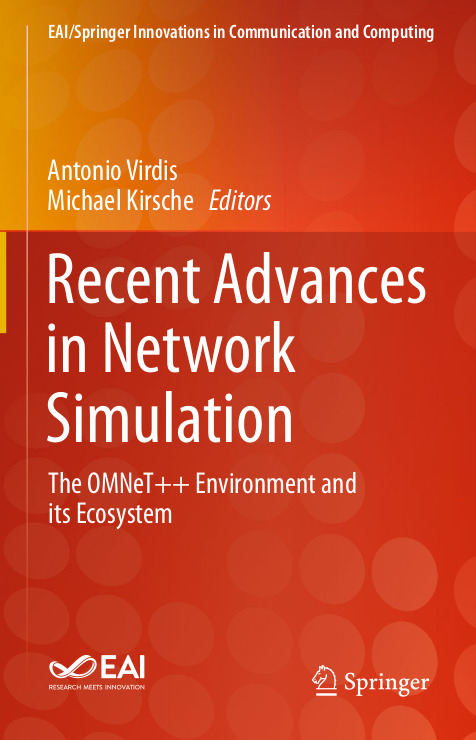 A new book providing a comprehensive overview into OMNeT++ and its major model frameworks has just been published by Springer. “Recent Advances in Network Simulation – The OMNeT++ Environment and its Ecosystem” (ed. Antonio Virdis and Michael Kirsche, Springer, 2019) represents a joint effort of numerous prominent figures in the OMNeT++ community.

The book begins with a practical overview of OMNeT++ itself, covering also the latest improvements in areas such as visualization and result processing, and extending into other topics such as emulation, co-simulation, checkpointing or using the cloud for simulation execution. The following chapters provide an overview for a selection of model frameworks in the ever-growing OMNeT++ ecosystem: INET, Veins, SimuLTE, RINASim, SEA++ and several other frameworks have dedicated chapters. The INET chapter, for example, not only contains an overview and practical guidance on how to assemble models for various types of networks, but, for more advanced use cases, it also provides explanations and code snippets on using the internal APIs of INET. The third part of the book presents the latest advances and novel developments coming from a large research community, such as live monitoring and control of OMNeT++ simulations, or using Python and Pweave.

We in the OMNeT++ team are proud to have contributed two chapters to the book (OMNeT++ Overview – Andras Varga, INET Framework – Levente Meszaros, Andras Varga). Thank you and congratulations to the editors and fellow authors for their hard work and dedication to make this happen!

See the book’s page at Springer, on Google Books (includes content preview), or buy it from Amazon.